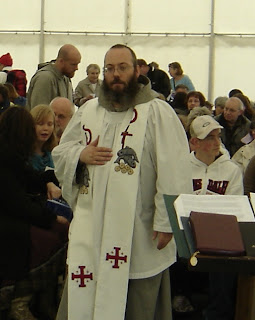 As we approach the great Feast of Corpus Christi I include a three-part reflection by Fr Sylvester Mary Mann CFR, of the Bradford Friary. Here is the first part:
Bread of Life…Culture of Death

We live in an ever increasingly secularized culture. Tolerance is now considered sacred; the sacred no longer tolerated. Ours is a culture of death because God Himself has been pronounced dead. In this cultural context, one may wonder if the faithful’s public celebration of the Feast of the Body and Blood of Christ, or more simply Corpus Christi, is relevant to the men and women of this age.

Does Eucharistic piety really make a difference? Are not such public spectacles outdated popular piety—yet another manifestation of a silly, unsophisticated, Catholic, medieval mind set which, like a bad and lingering hangover, just will not go away?

True enough, the Feast of the Body and Blood of Christ was born of medieval piety. Blessed Juliana of Cornillon (1192-1258), orphaned at age five and raised by the Augustinian nuns she later joined, experienced mystical revelations from Our Lord. In 1223, she told her spiritual director of a vision she had received twenty-five years earlier in 1208. It was of a full moon darkened in one spot. She was told that a great celebration in honour of the Body of Christ is missing from the liturgical calendar. Then, by Divine Providence, Blessed Juliana’s elderly spiritual director, Archdeacon Jacques Pantaleon, was unexpectedly elected pope – Pope Urban IV. In his short pontificate, Pope Urban IV established the Feast of Corpus Christi and employed Saint Thomas Aquinas, O.P. to compose the liturgy for the feast. Today, Saint Thomas’ composition is considered to be the masterpiece of Catholic liturgy. Pope Urban’s successor, Pope Clement V, further mandated that the Feast be celebrated throughout the whole Church. The Franciscans helped promote Corpus Christi by being the first Order to stipulate its observance in their legislation.

Posted by Fr Richard Aladics at 09:07