Cafod and the 'new' morality 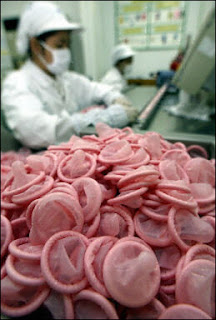 Cafod states that it does not distribute condoms and that its programme partners may not use Cafod money for condoms. Yet, the project of western-based agencies is, as we know, to supply condoms to the third world. Cafod money may not be used for condoms, but Cafod money frees us other monies to be used for the supply, dirtibution and promotion of condoms in the third world.
Furthermore, Cafod teaches the "ABC" approach to combatting AIDS. This "third way" promotes first, abstinence, then fidelity, but if these fail, then "use a condom".

In order to defend the promotion of condoms, Cafod as a Catholic Charity, is constructing a 'new' ethics, based on "solid science and good community development practices [together] with established and evolving moral theology and Catholic social teaching." (cf Cafod's website - Feature: Positive thinking on HIV)
Cafod therefore states publicly that the teaching of Humanae Vitae regarding the intrinsic connection between the unitive and procreative dimensions of the marriage act "does not seem to apply" for people who are under threat from AIDS, and that their using contraceptives is in fact therapeutic. Moreover, Cafod states that all this is based soundly on Catholic teaching - even though Cafod "does not have a catechetical role with regard to sexual ethics."
The root of this 'new' morality which Cafod is constructing is the careful work done by Cafod's moral experts and advisors who have divorced sexual ethics from social ethics - they have separated the question of combatting AIDS with condoms from the arena of universal morality. In the question of condoms, Cafod is overtly making distinctions from the Teaching of the Church.
Now first of all, sexual and social morality cannot be separated from one another - they are essentially linked in the human person and in society. Secondly, the only possible therapeutic use of condoms would occur when the sexual act is not involved. Thirdly, a pastoral situation does not create a new morality or new moral principles. The AIDS situation certainly requires a pastoral approach - however difficult that may be to bring about and to teach.
Cafod has shown itself to have bought into the new secular morality which promotes promiscuity, infidelity and the culture of death. It is a contrived and false morality in which grace and virtue are disregarded. Fr Matthias Nsamba has said that "sending condoms to South Africa is like pouring petrol on the fire of the HIV epidemic." Can we not support those agencies - such as the "Christ the Healer Project" - which do not distribute condoms and which teach behaviour change?

The aid offered by the West to developing countries has been purely technically and materially based, and not only has left God out of the picture, but has driven men away from God. And this aid, proudly claiming to "know better", is itself what first turned the "third world" into what we mean today by that term. (Benedict XVI, Jesus of Nazareth, Chap 2)

Cafod is in urgent need of renewal; other charities, such as "Mary's Meals" seem to be in that process right now!
Posted by Fr Richard Aladics at 13:54

Wow! And I thought Cafod was truly Catholic! :-(

Father, I don't want to support Cafod, for the reasons you state, but what is the alternative, especially in emergency situations?

Hoe can we get Cafod to change?

Hi, i just surfed in searching for interesting blogs on Spirituality, you have a cool blog. Do keep up the good work. I'll be back even though i live far from where you live. its nice to be able to see what people from across the world thinks.

Warm Regards from the Other Side of the Moon.

On a related note perhaps you might find the following link interesting. Its propossing a theory and i'll like to hear your take on the subject via comments. See ya...

Was
Jesus an Essenes ?

Fr Ray, one very good alternative to CAFOD is the "Christ the Healer Project". This is already supported by some Catholic High Schools in the UK. You will find a link on the Blog. Also, in Uganda there in the "Youth Alive" programme. Theis is also run in Zambia and Zimbabwe. Both these programmes teach behaviour change and are little known in the UK. (Perhaps because we need them as much as they are needed in Africa.)We actually need to discover more about these projects and promote them in the UK. This would be a very good way of challenging CAFOD. There is also the "Mary's Meals" charity - a link is listed on the Blog - which is something else we can support.