Family - become what you are!

This weekend Fr Julian and myself lead the very first "FriendswithChrist for Families" event: a Day of prayer and reflection. Summer has begun, and as the Northern Catholic Conference got underway in Southport, over in eastern England we were leading a dozen or so families in what turned out to be a day of grace - with Christ at the centre we had so much to share. 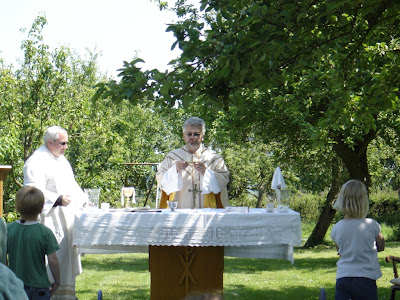 Not all who took part were Catholics, but all us knew that our families are very special places which we can open up so that God can establish His Kingdom there.
On the eve of the event we had a Mass and a reflection on the Sacred Heart as the focus of Family life and, on the day itself we followed a straightfoward format. After greetings and introductions we prayed the Joyful mysteries together, this was followed by two talks - one for the adults and one for the young adults - our subject was spiritual warfare. Both groups had much to share together. Then we celebated Mass of Our Lady and had a magnificent shared lunch. In the afternoon the children were lead in an activity which introduced them to the area of spiritual warfare. This was followed by a second talk for both the adults and young adults on the theme of the New Evangelisation of the Family - again we all had much to share. And then we prayed again - this time in a lead Hour of prayer and reflection before the Blessed Sacrament. After the BBQ we made our farewells to one another. 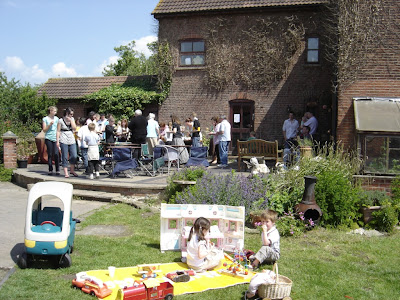 What was especially important about the Day was that it had not been planned as an event, but rather that it had been asked for by families, and that they had likewise asked for particular themes to be focussed on during the day. Rather than us planning all sorts of events that may or may not be attractive and uselful to people, both Fr Julian and myself are very glad to be asked to lead events that are felt necessary by the participants. In this way we can try to respond to real needs and desires.
Our special thanks go to Alan and Anne and their family for hosting this Day in such a warm and grace-filled way. You have made the new evangelisation of the family not merely a priority but you have shown us that it is a task given us by God which is full of light and joy.
Posted by Fr Richard Aladics at 11:13