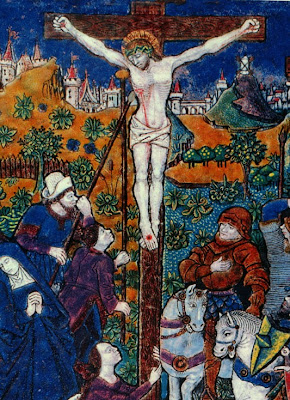 One of the talks from our Ars Retreat focussed on Christ's intention as He gave himself in the Passion. St John prefaces the Passion with the scene of the Washing of the Disciples Feet in order to show us His intention: Christ is desiring a spousal union with His Church. His death is not a death for corruption but for Resurrection.
Mary was already at the Cross, upholding her relationship with her Son. Her hour has come. She is present as the New Creation takes place. Christ speaks first to His Mother. And she performs the greatest act of self-abnegation ever made in human history, in order to bring about the Redemption. A virginal couple are the creators of the New Life.
Christ dies an extatic death; death overcome by love. And as He dies he gives up the Holy Spirit.
In St Luke's Gospel especially, this giving is made to the Father, but in St John's Gospel there is a horizontal movement in the giving of the Spirit. Where was the Spousal Church when Christ died? She was present as Christ's Mother who, as a virgin, was all given over to the Trinity. Mary, uniquely, at that moment was fully accessible to the relationship that Jesus wanted to establish. She was the one place where the Holy Spirit could dwell perfectly. So, She holds the Church in being while Christ lies in the tomb.
The soldier pierced the right side of Jesus so as to pierce His heart. It is in his Blood that Christ gives His love. Sr Faustina in her diary speaks of the Blood and Water as though they are Persons. They are the gift of Christ's love - which Christ was so prodigal with during His Passion; they are the given in Baptism - Water, and in the Eucharist - Blood.
This Mystery of the Blood and Water is central to the life of the Priest, for Christ instituted the Priesthood so as make present these gifts to the Church.
Posted by Fr Richard Aladics at 21:25

One of the most beautiful reflections ever read. Janet Smith said something similar to that in her talk on contraception, but not quite as precise as this.