When the country voted in the Labour Government in 1997 with the open support of many Catholics in England and Wales, we were told that there would be an new era of freedom and prosperity for all. No British Government, in modern times, has done more to harm the nature of society and to pervert of the moral order than this one. How could we have been so unaware - how could the people of Germany have been so unaware in the 1930s when they voted for Hitler. The complicity of so many British people who have continued to support the Blair/Brown Government is leading to the unleashing of a terrible darkness in the UK - that human life be subservient to a new ideology - the quest to vanquish God and truth from human life in the name of progress.
And suddenly, a Cardinal steps forward and makes a direct challenge to the leader of this ideology. Cardinal O'Brien's Open Letter to the Prime Minister should become a call to the whole nation to wake up and realise what is going on right under our very noses. I quote a part of this letter here: 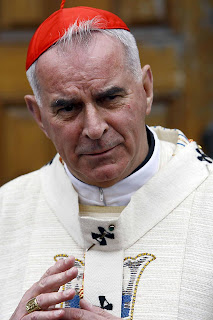 "Should this Bill become law, removing tissue from incapacitated adults or children, without their specific consent in order to create animal-human hybrid or other embryos would be permissible, as would creating artificial sperm or artificial eggs from bone marrow or even cord blood.The grotesque implications of these procedures are utterly horrifying. The proposals in this Bill represent a breach of 50 years of ethical medical research. They by-pass the Declaration of Helsinki, the Human Tissue Act, the Mental Capacity Act and the Human Rights Act. Removing parts of people’s bodies without their consent, utterly flies in the face of all BMA and GMC guidance on consent to research.Such behaviour was last seen under the Nazis. Following the liberation of the concentration camps in 1945, the full horrors of the Nazi’s atrocities were revealed to a shocked world. The hideous savagery of their experiments convinced the civilized world that such practices must be outlawed forever. I am appalled that you are promoting a Bill which seeks, by stealth, to create a regime where extracting tissue and cells from human beings no longer requires their consent or involvement."
We should pray that the Cardinal's action will bring many to their senses. May this courageous and credible voice that contradicts the evil being proposed by this Goverment be a call to us not to remain silent in the face of an evil Goverment.
Posted by Fr Richard Aladics at 20:38

Our help is truly in the Name of the Lord, as our own Fr. David Smith back here in a freezing Halifax said a couple of sermons ago. At Mass for the Feast of Christ the King in the EF Rite at Our Lady of Lourdes, Cardigan Road, Fr. Tim Wiley tore apart so many modernist projected ideals and ideas calling on us to make Christ the Redeemer, the King of our hearts and souls.
There does appear to be a change of mood in England. It reminds me of days in my childhood when in winter I came home from school to sit by candlelight with elderly neighbours who had no gas powered heating, during the power cuts of the early 1970s. I even remember an All Saints evening Mass at St. John's Buttershaw offered by virtue of candlelight only. The whole effect was spoiled when the strip lights came flicking and fluttering on during the offertory.

The LMS is holding its first Northern Priest Training Conference at Ushaw in 2009 and plans would seem to be well underway.

I'm very happy for you as you seem to be settling in, but here in England I do fear the culture of death in which we increasingly find ourselves caught up in.

Our Lady of Lourdes, Cardigan Road was my home parish as a boy. And I too remember the great delight of the pre-Cociliar Liturgy and doing my homework by candlelight during the miners strikes.