Last week, Dr Simon McCaffrey, an Obstetrician and Gynaecologist and the President of "Right to Life Australia" came to Campion College at the invitation of the College's Human Rights Society, to speak on the subject of the role of a Catholic Doctor in a Secular Society. 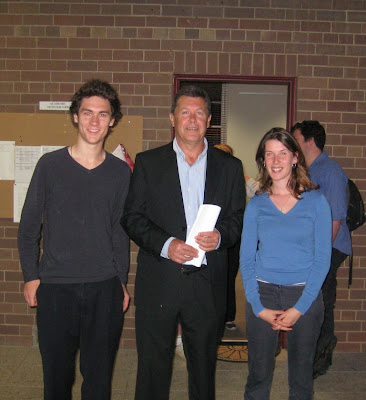 Dr McCaffrey gave us an analysis of the different ways in which secularism is present in society and how a Catholic doctor is able to respond. It is especially at the interface with "intermediate secularism" that a Catholic should dialogue seeking to restablish common ground on the basis of the dignity of the person. I was immensely impressed by the way in which this doctor gave witness to his faith and revealed, not simply a deep understanding of genuine morality, but the way in which he lets his spirituality inform his professional life. He told us "that after thirty years of practicing medicine I am convinced that Catholic moral teachings have their origin in the Holy Spirit ."
He described that what lies at the heart of society is unconditional love, and the reason why society is foundering today is because abortion is attacking unconditional love. As a doctor trying to help women who have "unplanned" pregnancies he seeks not to battle for the life of the child she is carrying, but rather to uncover this unconditional love which a mother has for her child and thereby open up the alternative to abortion - life.
In Dr McCaffrey the College met with a doctor who is on the frontline here in Australia and who, often working alone and with the odds stacked highly in favour of the culture of death, is undaunted because he relies on grace. We were tremendously impressed by the witness he gave us.
Posted by Fr Richard Aladics at 09:18

Thank you Father for this fantastic blog site. I'm John, the medical student who sat at the dinner table with you on the 2nd night of iWitness. I haven't met with Dr McCaffery, but what you say about him makes me want to meet him soon, and learn more from him about how to be a doctor who lives out the Catholic faith to the full.