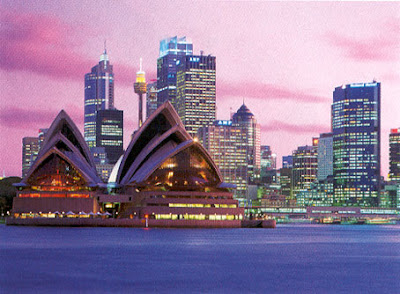 I cast a glance at the Australian news today, actually, the news for New South Wales:
PREMIER Nathan Rees is facing a new crisis of confidence in his own ranks as voter anger spills over from the mini-Budget and sacked MP Tony Stewart.

HOUSEHOLDERS would be charged for each flush under a radical new toilet tax designed to help beat the drought.

NSW Police Minister Tony Kelly allegedly told a lobbyist he wanted to "shoot him with a Taser gun" during a heated meeting over insurance levies in his office.

These are the headlines today, and there's loads more just like them. This kind of culture is so intraverted and so intensely mindless that it's noise occupies much of the real space of human freedom in Oz. It is worrying that so soon after the Gospel was preached here, during WYD, with such clarity and such light, that we still see a culture so impervious to the Gospel being purveyed so loudly. Coming from England, a country that embraced an alternative to the Gospel in the sixteenth century, and is still hanging on to it, I am used to the secular chatter which is engaged in so as to drown out the life-giving message that Jesus brought. But Australia is a new country with totally new opportunities which does not now have to follow its founding culture. Yes, it is true that many in Oz have heard the message of Christ and also that the message of the media is totally irrelevant to real life; ie. the Gospel. Nevertheless, it is also true that the Holy Spirit is endeavouring to make a breakthrough here in Oz at this time, to free Australians from this mindlessness and to enable them to receive the whole gift of the Gospel. During this time after WYD in Sydney we need to maintain a real movement of intercession for openness to grace and to truth.
Posted by Fr Richard Aladics at 02:17

You may not know, Father, that Australia is sometimes referred to as "the bastard child of the Enlightenment" - religion, of the Established variety, was brought here during the Anglican nadir pre-Oxford movement, and Catholicism, initially repressed as linked only to Irish convicts, having fought so hard to get entrance and then acceptance, has suffered the same post-Conciliar blues as elsewhere. Many secular writers boast that Australia was founded as and has remained an essentially a-religious society, though I think the many Protestant sects would prove otherwise. Nonetheless, the mindless hedonism you diagnose is the prevalent trend: what one faces as a Catholic in Australia is not even so much the modern secular aggression against morality, as the all-encompassing apathy toward religion that sunny Australia, the (materially) Lucky Country, unfortunately seems to engender in its comfortably affluent citizens. I myself like to name this my nation as the Fools' Paradise, because we have everything we need and so drift into practical atheism.

Thanks, Joshua, for this well written comment. I was not aware of what you refer to. My post is based simply upon what I have seen for myself since arriving in Oz three months ago. I can sense also however, that the Gospel and the Church has more room to manoeuver than in the UK - I think, becuase the country is young and less burdened by the legacy of its own history. And, after all, the Holy Father came here four months ago and called Australia to see its real life in building up the Kingdom of God.

Have you read the headlines in the top selling British newspapers The Sun, The Daily Star, The Daily Mirror etc?

Yes, Anonymous, I'm used to those - I hope you're not.