Tomorrow is the Feast of St Edmund Campion and companions, who were hung, drawn and quartered at the London Tyburn on 1st December 1581. These, and men and women like them, were at the forefront of both the English Rennaissance and the Evangelisation of England in the second part of the Sixteenth Century. Unlike the European mainland in that era, in which many nobles and bishops sought power and prestige, in England both the Crown and most of the nobility were seeking to completely overthrow the Church and assume a measure of divine prerogative. It is remarkable that those in England who were seeking a genuine rennaissance in human terms, were also at the forefront of evangelisation - faith and culture together- a forerunner of the New Evangelisation. The witness of their faith, so far removed from political intrigue, but so given over to Christ and the power of the Gospel is an enormous gift of grace and inspiration to the Church in England and overseas. They lived for Christ and the Church in the face of the most hideously prejudicial laws and they accepted that state of affairs with a committment to God's plan which is difficult for us to imagine, let alone replicate. We cannot but remember St Edmund Campion and the others, SS Ralph Sherwin and Alexander Briant, on their feast day - what great leaders in the Faith we have, and what a great patron and inspiration for the staff and students here in Campion's College in Sydney. The photo below shows a vestment which comes from Sixteenth century England and is thought to have been worn at Mass by St Edmund Campion. It is kept, along with many others treasures from that era, at Ladywell near Preston.
St Edmund Campion, pray for us, that our minds and hearts too will burn for Christ. 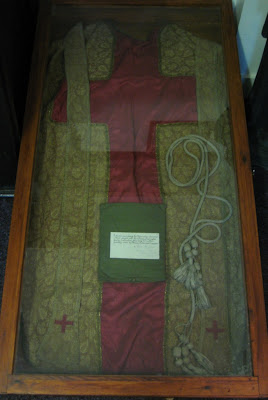 Posted by Fr Richard Aladics at 10:11

We were at Ladyewell recently and could not get a picture of those vestments to come out clearly on the digital camera - each shot was blurred!

Wishing you and all the Campion staff and students a blessed feast day and a holy Advent.