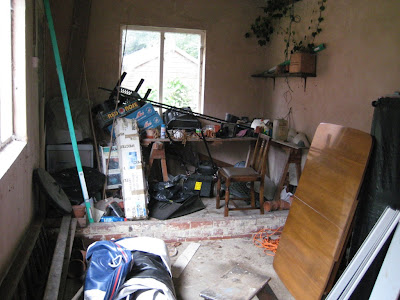 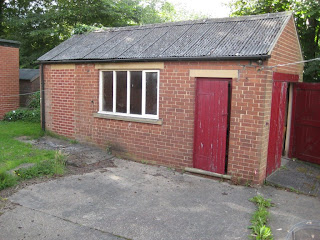 In the parish which I left before coming out to Oz there was a dusty old garage behind the presbytery which I used only as a storage space; my car never once went inside. At the far end of the garage was a level raised about two bricks above the level the rest of the garage interior. One day I learned from a parishioner that this slightly raised area had once been the parish meeting room. A flimsy dividing screen had divided this area from the rest of the garage where the priest parked his car. This "room" was used by all the parish groups and sodalities right up until the early seventies when a parish hall was built - pictured below. 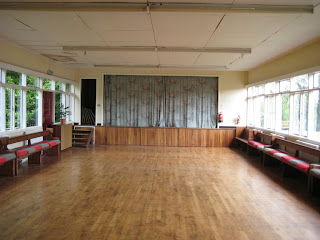 You can see the raised level in the top photo above with a wooden chair and a pile of clobber on it. In the second photo you can see the blocked up former entrance to this Parish Room.
When I heard this I was struck by the fact that the Church in our parishes had been alive when such facilities were the only ones we had at our disposal. In those days there was a sense of the Mission of the Church and of the need for the parish to be involved in it. It was sometime in the sixties and seventies that we began to think that "we had arrived", that we had established ourselves, that we no longer had to bother about building the Christian life, that we lost the sense of Mission and then slowly our parishes began to die. When I was in this particular parish the 'new' hall lay unused except for a small handful of the faithful who came together there for coffee after Sunday Mass. Until parishes return to embrace the Mission of the Church - which today we know is the New Evangelisation - this slow decline will continue to its natural end. Nevertheless, it was startling to realise that the whole Mission of this, my former parish, had once been put into operation from such a humble and basic room - but it was a room in which the Church had been alive!
Posted by Fr Richard Aladics at 02:55