The latest from Clint Eastwood 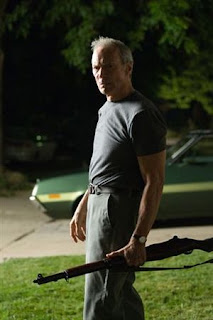 Driving through Sydney last week and listening to the radio I was intrigued by a review about Clint Eastwood's new film "Gran Torino". The reviewer made little of the fim, saying that it was about a certain kind of narrow-mindedness in mid-west America and he advised his listeners to wait until it comes out on DVD to watch it. I thought otherwise and went to the cinema to see it the other day. The setting of the film is certainly a sector of narrow-minded mid-west, but the film is about grace. It is an extraordinary film and I certainly recommend it.
As the film ended and I got up to leave I turned to look at the rest of the viewers - they were rooted to their seats in stunned silence!
Posted by Fr Richard Aladics at 07:24

do you know if Mr. Eastwood is a follower of Christ?

I know nothing about Clint Eastwood, but it would be interesting to know if he ia Catholic/Christian.