Leaders after the heart of Christ 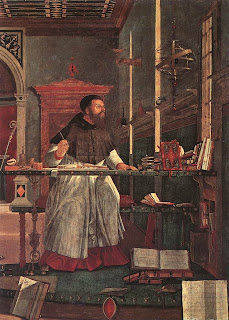 St Augustine (of Hippo) once while he was preaching famously addressed the fathers of families who were in his congregation as "my fellow bishops". Quite a radical thing to say but an expression which reveals a deep truth about fatherhood. The reason why this could be considered radical is because St Augustine was releasing married men for the role of leadership which God had entrusted to them. Here we see a bishop not seeking to control his flock but rather empowering them for their unique mission.
There is nothing contrived about this mission for it is something which arises from the very nature of Christian manhood, which has received, in the sacrament of marriage, the goods of Salvation. St Augustine was not timid in the way he spoke about the being of a bishop and being of a married man, comparing the spiritual and pastoral leadership of a father to that of his own as a Catholic Bishop.
There is much then, that a bishop (or priest) can learn from a married man, and much that a married man can learn from a priest (or bishop) since their roles spring from the same source - the love of Christ for His Church.
In Familiaris Consortio JPII said:

In revealing and in reliving on earth the very fatherhood of God, a man is called upon to ensure the harmonious and united development of all the members of the family: he will perform this task by exercising generous responsibility for the life conceived under the heart of the mother, by a more solicitous commitment to education, a task he shares with his wife, by work which is never a cause of division in the family but promotes its unity and stability, and by means of the witness he gives of an adult Christian life which effectively introduces the children into the living experience of Christ and the Church.

Like a bishop a married man is called to bring about the unity and the mission of his family - a living experience of Christ and the Church. What a great calling, what a wonderful thing it is to enable fathers to appreciate their mission, what a great thing for a married man to strive to fulfill, what a great and essential part of the New Evangelisation. We need Catholic fathers in this age. This is something which the world doesn't tell men, but it is certainly something which is worth pointing out - and how marvellously St Augustine pointed it out all those years ago in Hippo.
Posted by Fr Richard Aladics at 10:17

thank you Fr Richard, once again you post something I needed to read today. We hear little about real fatherhood today, and so your post is all the more important. As I read my little one has fallen asleep in my arms, and moved me to prayer. It's great God has given you a wounderful mission over there, but just a little sad that a good priest had leave these isles. We miss you!

What a wonderful, yet, at times, humbling experience it is to be a father ! God has given my wife and me eight children and He has blessed us so much ! We know we, like all people, must strive to follow the example of The Holy Family. There is no secret way to achieve this, because Our Lady's response at The Annunciation shows us how to put this into practice. When she says, 'Let it be done to me according to Thy Word', she is really telling us, mums and dads and everyone else, to use this response in all areas of our lives. Her response is an acceptance of God's Will, whatever the cost. That bit about doing everything 'according to Thy Word', I feel, is the key to unlocking so much that otherwise may remain hidden. How often have I said in my own life, 'according to my word' ! It has been only after I have eventually come to my senses that I have come to recognise the necessity of God being the one in charge. Sometimes when I have looked upon my children, when they are asleep, I am filled with the Wonder of God, for, in their vulnerability and trust in me as their father, they remind me of the trust I and all adults need to show to God Himself. It is awesome to have been given a share in the Fatherhood of God. And I sometimes think God does his night time rounds for all his children too ! Thank you, Father, for flagging up the importance of fatherhood in today's world. I can just about cope with that. But as for being a Bishop...well that's just too advanced for me ! God Bless you, Father, and all your work.