Starting up a culture of appreciation 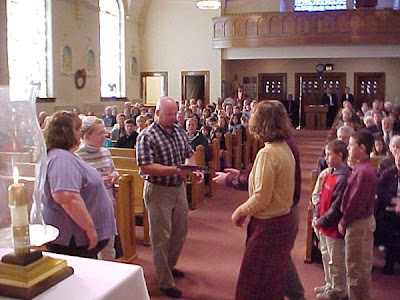 Fr Tim Finnigan of "The Hermaneutic of Continuity" may be experiencing some difficulties in his parish because of the way that he is promoting the Liturgy, but those difficulties are a sign that a new appreciation of the Liturgy is beginning to happen. And that the hinge of this new "conversation" about the Liturgy has been the way in which Fr Tim has implemented the "Motu Proprio" in his parish.
Fr Tim has now made available, through his blog, an excellent essay on the Liturgy which he has written and in which he offers a very clear historical understanding of the way in which the Liturgy of the Mass has developed, together with some important comments on current practices in the Liturgy.

This essay and Fr Tim's pastoral leadership in his parish is cutting new territory for the Church in the UK. In most parishes there is a status quo which insists that the Liturgy be celebrated in the most banal way possible and in which there is no recognition of the calls from the Church for a renewed Liturgy or a renewed appreciation of the Liturgy. So, the two important Liturgical documents of our age "Redemptionis Sacramentum" and "Sacramentum Caritatis" are virtually unknown. For many Catholics the experience of the Mass is still that of "Colours of Day" and rotas of lay people fulfilling loads of jobs on the sanctuary. If you add to this stymied situation that of the number of people who come up to communion without any idea of what they are doing, and a whole raft of practices which are seemingly now set in stone, but which are actually abuses, for instance, lay people preaching or helping themselves to the sacred species at communion, then we are talking about a totally disfunctional situation regarding the Liturgy.

Yes, indeed, Fr Tim has made a real breakthrough and, in his territory at least, has opened up the situation in favour of a genuine process of renewal and appreciation of the Liturgy which the Church is calling for. He is at the forefront of leading the Church in the UK out of the Liturgical stymer and disfuntionality that it is in, and into the reform of the reform. And the heart of the reform of the reform is a appreciation of what the Liturgy is. This means not only seeking to celebrate the new Mass in a renewed way, but also celebrating the Mass of 1962. And it also means returning to study "Sacrosanctum Concilium" and the history of the development of the Liturgy - to follow the fatherly directions which B16 has given us in "Sacramentum Caritatis" and throughout his pontificate.

If there is any upset in Fr Tim's parish, this will not have been intended, and I do hope that any upset can be easily addressed in favour of being led to appreciate in a renewed way the greatness of the Liturgy. I also hope that Fr Tim's leadership here will influence many in the UK to break out of a self-imposed liturgical ghetto and to also embrace the reform of the reform.
Posted by Fr Richard Aladics at 20:11

You conclude your post to Father Finigan [The hermeneutic of continuity] Parish dispute "goes loud",with the following sentence..'You are at the cutting edge and you are paving the way for renewal.'

In the 1969/70 I played at the heart of the defence for the English Martyrs team that won the under-14 Dominic Savio Football (Soccer) League here in Millwall's South East London.The winners medal is adorned with the "Chi-Rho" or "sigla": the letters "X" and "P" representing the first letters of the title "Christos," were eventually put together to form this symbol for Christ ("Chi" is pronounced "Kie").It is this form of the Cross that Constantine saw in his vision along with the Greek words,TOUTO NIKA,which are rendered in Latin as "In hoc signo vinces" and which mean "in this sign thou shalt conquer.

In the 2008/9 season my FARE Millwall + supporters legal case has found it's way on to The hermeneutic of continuity where vesper has left a new comment on the post "Stirring stories for a packed Church".

The following e-mail sent yesterday to the MPA brings you and all your readers 100% up to speed with my qualified suveyor's London City Challenge development case.

Thank you for your letter dated 17th February 2009 which I received today.

I find your half hearted apology for the excessive and stress inducing delay to be insulting in the extreme.

I totally disagree with both the politically manufactured findings of Assistant Commissioner Robert Quick's investigation dated 28th May 2008,and the MPA's conveniently delayed decision made by Members of the Professional Standards Committee on the 11th February 2009.

Football is a 'SACRED AND GREAT' game linked to Churches + throughout the world.It deserves to be treated with RESPECT.

Could Catherine Crawford,the MPA's Chief Executive explain to me,John Austin MP,the FA, KICK IT OUT etc,how could a high profile Football Against Racism in Europe case,involving Sir Ian Blair,Andrea Cunningham,the IPCC,Guido Liguori and the Honourable Mr Justice Goldring,be buried alive in her office since 27-29th May 2008?

I shall be contacting the IPCC to lodge an appeal within 28 days of your letter,and if necessary I will challenge their decision in the Royal Courts of Justice as I was forced to do on the 28th February 2007 when the Government last tried to cover up the wickedness exposed by my FARE JUSTICE NOT VENGEANCE FOCUS 1991-2009:IPCC REF 2005/005639:COURT REF CO/8897/2006:MPS REF PC/2571/07 legal case.

The hermeneutic of continuity has kindly published an update of my professional work which as you can see has now reached a critical legal juncture here in London : vesper has left a new comment on the post "Mass at St Peter's".

Hard evidence relating to my high profile FARE JUSTICE NOT VENGEANCE FOCUS 1991-2009 :MPS ref PC/2571/07 case for the defence against NF/BNP entry-ism into London's Sporting/Planning Arena,which was originally backed up by a malevolent prosecution by CID Greenwich after a phone call made by Steve Taylor of the TSG,has been handed to MPS Assistant Commissioner Robert Quick MBA by DS Ian Coleman of the MPS Directorate of Professional Standards,Internal Investigations Command.