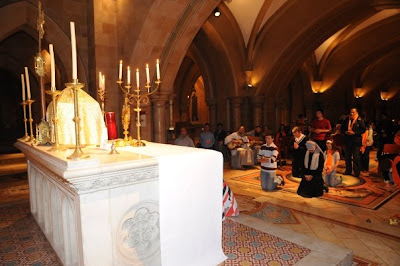 One year on from WYD and a portion of the Church in Sydney was ready for the next step forward which God had planned. A Congress of the New Evangelisation is an unusual event - to say the least. However, the Church in Sydney is further ahead than might appear to the casual enquirer. For to bring together an eclectic planning team, to invite foreign religious and missionaries, to envisage an eight day event which was extremely difficult to describe or convey any real sense of, before the event itself, to plan an event which was itself an interweaving of many sub-groups and sub-events; this set the Congress apart for success. From day one there was a sense of joy that the Church was truly revealing herself - the Church of the New Evangelisation - a revitalised Church, revitalised becuase she had taken the Gospel to her heart, but not so as to keep it to herself but to make it available, as she had been asked. Frankly, the Congress was a whole Christian culture, and to be immersed in it as we were was to be filled with a joy and a life which witnessed to an outpouring of grace on the Church and on the city that week. Many said that the Congress had been a far greater grace to them than WYD had been!
The Congress revealed the Church of the New Evangelisation in Sydney. A Church made up principally of young people, the new movements and a small number of older people who thirst for the renewal of the Church. The Congress revealed at the same time who is not a part of the New Evangelisation - the clergy, the parishes, the schools and many, many rank and file Catholics. The Congress revealed in some way the capacity of the Church in Sydney for the New Evangelisation - the 'can-do' mentality set next to a tremenous talent pool enabled an expression of Catholic life and mission far greater than had been envisaged or planned by the planners.
The Congress was God's Congress. We had opened ourselves to God and allowed ourselves to be used by Him. What took place during those eight days far exceeded our competence and skills. The life and mission of the Church in Sydney has been changed by the Congress. The embracing of the New Evangelisation has changed those who allowed themselves to be influenced in this way by the Gospel. This is the part of grace in our lives - this is the gentle power of grace which gave to the Church, on the first day of Pentecost the ability to live and breath the life of Christ. Here in Sydney we felt that power again.
Posted by Fr Richard Aladics at 10:04

I would probably feel more excited about the New Evangelisation if I had confidence that the hierarchy who presided over the collapse of authentic Catholic religious education – handing on the Faith – in our schools and from our pulpits had not just washed their hands of the Old Evangelisation as being ‘too hard to fix’ and moved on to something new leaving the confused people in the pews and abysmally religiously ignorant students in the schools to pick up the orthodox Faith as best as they can - or not.