Discovering JPII as a young priest 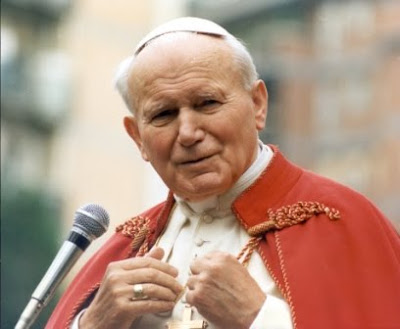 So, it was five years after my priestly ordination that I was awoken to the greatness of JPII. Having been introduced to the Theology of the Body in 1993 I set about getting hold of copies of all the various Letters and Encyclicals he had written. Between 1994 and 1996, wherever I encountered a Catholic bookshop I would buy copies of those Letters I did not yet have, and I gradually put together a complete collection of all his teaching documents up to that time. And I remember setting about reading each one as I acquired it, making notes in the margins and re-reading it as I was so hungry to absorb its content. My Sunday sermons too began to be formed by JPII's teachings.

Indeed looking back, what was taking place in me was that I was discovering the whole Gospel anew through JPII. His witness to the Gospel was tangible. He was living the doctrine that he was teaching. And the Gospel he lived and taught was a Gospel which embraced the whole of humanity; that is to say, he witnessed to the Gospel is a fully human way, embracing the feelings, human affectivity, hopes, fears and sinfulness. Just about the whole world saw JPII take humanity to himself. No longer was Christianity a disembodied or cerebral spirituality. No, JPII showed me that is was safe to be both Christian and human, indeed, to be Christian is to be fully human.

Regarding the Priesthood itself, JPII gave huge encouragement to priests and renewed our confidence, but the special grace that I received from him was to appreciate how I was called to make my life over to Christ. That I no longer needed to see my life as a priest in self-important ways or evaluate myself according to human standards, but much less self-consciously to simply dispose my whole life a seed-bed for God to use.
Posted by Fr Richard Aladics at 08:48