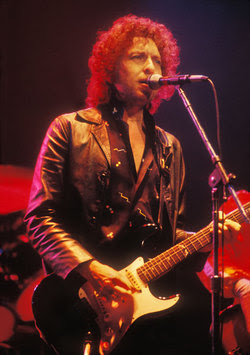 It is three decades now since Bob Dylan sang his magnificent anti-secularist songs, "Deadman" and "Yonder comes sin", for example. It may be too much to hope that he will sing these songs in a months' time when he tours Australia. Attitudes have changed radically since the early 80s; today, the atheistic secularism of the West is very hostile to the Faith.
The relationship between the Church and the world is seen in relief in our day. Even as late at the 1970s, British Society accepted and recognised itself as basically Christian. But secular attitudes and the culture which they have generated have taken hold very strongly. Prime Minister Edward Heath used to speak about how Christianity had influenced his political beliefs. He even wrote a book on Christian values. Today in a climate where the culture has become intolerant of Christians, the Bishop of Motherwell writes to Prime Minister Cameron challenging him to explain why he says that Christians are the intolerant ones.
During the last decade we saw the emergence of politicians (for instance, Tony Blair and Barak Obama) who have tried to redefine the relationship between politics and faith, and as a consequence to re-envisage the nature and place of the Church in the world (from a secular point of view). Pope Benedict's recent visit to the UK undid much of this posturing by politicians, by the Pope expressing in a simple and gracious way, who he and the Church is. His recently published interview with Peter Seewald "Light of the World" focusses on the relationship between the Church and the world. And although the Holy Father in some way, but wisely I think, understates the difficulties which the world is presently in, he speaks in such a way as to show very clearly the nature and mission of the Church, which is set in relief precisely by the world's current atheistic ideologies. This book is another important read for Catholics today, for as the Holy Father says, "The Church is always called upon to do what God asked of Abraham, which is to see to it that there are enough righteous men to repress evil and destruction" (page 166). Perhaps Bob Dylan too has a copy of this book.
Posted by Fr Richard Aladics at 09:00