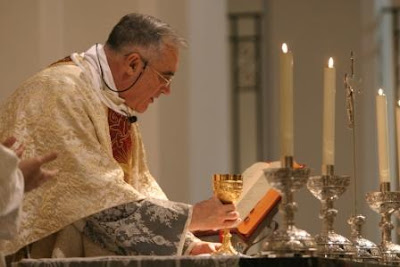 It is very good to see today an interest, and a discerned interest at that, in Liturgical formation - genuine Liturgical formation. That is to say, a focus on the action of Christ in the Liturgy and how each of us, both celebrant and people actually participates in what He does in the Mass.
A few posts ago I directed readers to a number of important sources of the Reform of the Reform. I would like to recommend here the small book "Sacred Signs" which Romano Guardini published in 1927. This simple book is essential reading, I think, for today's context. It speaks about the meaning which lies behind all the gestures and movements, not so much of the priest, but of the person who goes to participate in a Mass. The liturgical culture today, which is so 'wordy' has relegated movement, action and gesture to the 'back foot'. Yet Liturgy is itself comprised of sacred signs and actions. Liturgy is a 'doing'.
Cardinal Ratzinger in his book "The Spirit of the Liturgy" speaks of how he was inspired by the book "Sacred Signs". I would recommend the book first of all to parents, since it is good if we can first learn the extraordinary value of sacred signs at an early age from our parents. However, if you have never been exposed to the richness of Liturgical gestures then this book is also for you. After that you can progress to Guardini's more elaborate book "Preparing yourself for Mass". This book would not suit children, but is essential reading for a generation who need now to pick up the pieces that were cast aside in previous decades.
When the new Mass was introduced in 1969 it was introduced as a solution to the need for Liturgical reform, but mere change was inadequate. In fact, genuine Liturgical formation was necessary but was ommitted. Participation, properly understood, not liturgical innovation, is what revolutionises the Liturgy.
I am very glad then, to see today an emerging interest, especially on the part on young people, to rediscover the vast riches of Catholic Liturgy. And how providential it is, in our day, that, arguably, the bishop with the most Liturgical understanding and vision was elected to the Papacy! Listen to what Benedict XVI teaches, to what he actually says about the Liturgy; be formed by him and the Reform of the Reform will take place through you.
Posted by Fr Richard Aladics at 05:44

Thanks Fr! Sacred Signs isn't readily available to buy online, but is free to read here: