He who stands at the forefront of the new era 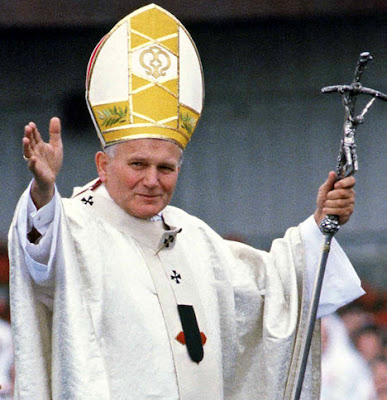 If it isn't evident already, then tomorrow's Beatification will make it even clearer, what an enormous gift from God is the life and witness of Pope John Paul II.

His Pontificate accompanied me for over half my life and I know that his influence in my life is very significant. My first memories of him go back to my student years and to the TV news reports of his first apostolic visits abroad. I remember that what fascinated us all were the impromtu conversations he held with young people who had gathered, at night, outside the place when he was spending the night. He would come to the window or porch and speak with the young people, and it was often simply a question of them wishing one another a good night's sleep.

I was a student representative at the Coventry Airport Mass on Pentecost Sunday 1982 during his visit to the UK. We were totally thrilled by his presence in the country and were simply filled with wonder the the Pope had, at last, come to England.

During my seminary years in Spain, apart from the Rector's own delight in and devotion to JPII ( he took us to Rome to see the Pope in my first year; we also participated in JPII's 1982 visit to Spain, taking part in the Mass at Toledo), the Holy Father rather dwindled into the background as no one else, involved with our studies, paid much attention to him. Looking back I can see that a similar attitude was taking hold in the UK, and it is significant that no video record of JPII's historic 1982 visit was made as a souvenir.

By the time I was ordained priest in 1988 I was still totally unversed in JPII's teaching, and it was not until I was introduced to the Theology of the Body by another priest in 1993 that I was awoken to the nature and importance of what this Pope was about.