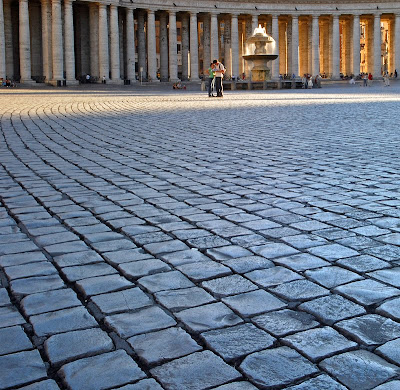 I have wanted to post on this subject ever since I read the Holy Father's message for World Communications Day which he gave at the end of January this year. My ears pricked up when I heard him liken the transformation in human relationships which is taking place through the internet to the upheaval in human relationships which was caused by the Industrial Revolution.
Although I have had a Facebook Profile since 2006, I have withdrawn from Facebook somewhat, at least in terms of the attention that I give to it. Facebook is but one network among many on the web and it is the only one that I have a part in. Direct human contact remains for me the predominant and essential medium of relating with others.
In the immediate decades before the advent of the Internet we saw the genesis of a form of youth culture in which teenagers came to inhabit a parallel world to that of older generations. This world had its own form of communication, one that was disconnected from the world that other generations inhabited, and which gave rise to the phenomenon of the 'generation gap'. Teenagers became disconnected from their parents and vice-versa. This culture is well expressed by such films as "Stand by me", "Paranoid Park" and "Elephant". This culture was the forerunner to today's social networks on the Internet, which have become a leading culture in our day.
However, the Holy Father is genuinely intuitive in reminding us of the era of the Industrial Revolution, during which the "human desire for relationship, communion and meaning" (B16) was profoundly altered, especially with reference to the family. Today's culture echoes that era, especially in terms of the family, which uniquely can offer the essential ingredients of life, which are human warmth, affection and belonging. Our real relationships, rather than our virtual ones must remain the main focus of our attention, and we should not be drawn away from the real meaning of our lives by the Internet. Nor should young people be lured away from their family and their real friends by 'youth culture'. The Industrial Revolution diminished our humanity, and it is clear that the Internet has the capacity to do likewise.
We are at the beginning of a new era and it behoves us to look critically at what is taking place rather than simply going along with the current. The Holy Father's message, which he titles "Truth, proclamation and authenticity of life in the Digital Age", asks indispensible questions about the contemporary Internet culture which "urgently demand a serious reflection":

"Who is my “neighbour” in this new world? Does the danger exist that we may be less present to those whom we encounter in our everyday life? Is there is a risk of being more distracted because our attention is fragmented and absorbed in a world “other” than the one in which we live? Do we have time to reflect critically on our choices and to foster human relationships which are truly deep and lasting? It is important always to remember that virtual contact cannot and must not take the place of direct human contact with people at every level of our lives."

And that "the Gospel demands to be incarnated in the real world and linked to the real faces of our brothers and sisters, those with whom we share our daily lives."

You can read the whole of the Pope's message here.

Posted by Fr Richard Aladics at 10:03