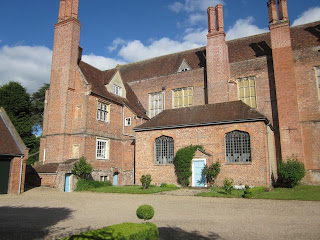 On a recent visit to Mapledurham House, just west of Reading, I was shown the priest hide which St Nicholas Owen built there. I am very grateful to the owner of the house for showing me this extraordinary hide; in fact, it is a series of connecting hides. In the photo above, which shows the back of the house, the 1800s chapel can be seen; the hides are in the chimney stack which is to the left in the photo. The 'principal' hide is  entered from the garret, the hide itself is within the chimney stack on the second floor, which connects to a hide beneath it in the first floor, which connects to a concealed exit/entrance in the ground floor or basement - whose two blue doors you can see to the left. 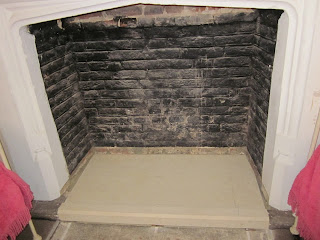 The garret space, which is effectively the third floor of the house, was, in recusant days, the secret chapel. At the end of the chapel is a tudor fireplace. The altar would have been set in front of the fireplace. 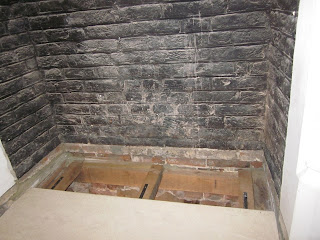 The stone floor of the fireplace can be moved forward to reveal the entrance to the hide. When I saw this I was utterly amazed; I have never seen anything like it before. Although the stone base to the fireplace is new, it is hard to imagine that this entrance would ever have been discovered. The stone fits the fireplace and surround perfectly, yet moves backwards and forwards with comparative ease. The chimney itself is a real chimney and a log fire could burn away happily in the fireplace with absolutely no danger to a priest concealed below.
The next photo was taken of the hide itself looking directly upwards from the first floor towards the now closed stone entrance. You can see the wooden frame which supports the sliding stone entrance.
To the right, in the picture, you can see a plastered recess; this forms part of a breathing hole to the exterior of the chimney stack which would give necessary ventilation to the hide. This entire system of hides, including the plaster work, was the work of St Nicholas Owen - the master hide builder. 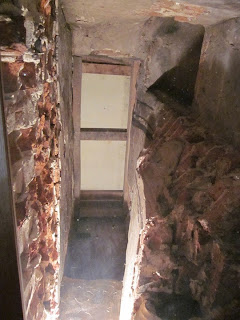 Mapledurham House was built between 1588 and 1612. These hides were most likely built during the 1590s and shown the extraordinary craftsmanship of this great saint.
In the next photo you can see the breathing hole recess and its original plasterwork; quite breathtaking! 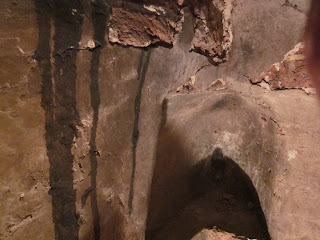 I don't yet know if the hides were used, or if Mapledurham was subjected to official searches. This hide is so well contrived - in some sense, it is a work of grace.
Posted by Fr Richard Aladics at 12:46

Glad to see you finally got there, dear Father. Happy Anniversary.