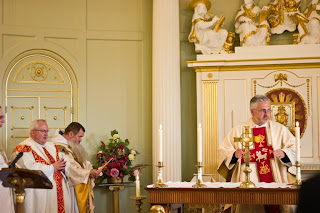 Even though I have now lived overseas for just over twelve years, most of my priestly life has been lived in Yorkshire. There was something quite providential then about this celebration taking place in the historic chapel of the Bar Convent in York. The chapel not only has its very own priest hide, but is also the home of the reliquary of the hand of St Margaret Clitherow, Britain's foremost citizen and supporter of the Catholic Priesthood.
The Mass was that of the Anniversary of Ordination, and I am especially grateful to the priests who joined me at the altar in offering this sacrifice of thanksgiving. Particular thanks go to Fr Peter Bristow for preaching the homily at the Mass. His generous priestly words of evangelical truth and fraternal testimony were sincerely appreciated. The photo below shows me with Fr Peter at the celebration which followed the Mass. 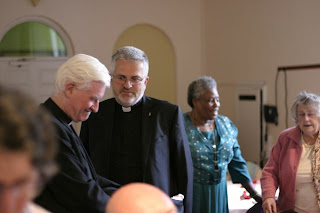 Special thanks also to the Rudgate Singers (www.rudgatesingers.co.uk) who sang the Antiphons of the Proper (Introit, Offertory and Communion), together with the Ordinary, and the Solemn "Salve".
I will post again on this celebration, but I would also again commend the Sisters and staff of the Bar Convent for their hospitality and the service we received there. As a venue for such a celebration, the Bar Convent would be hard to match. And the food which was prepared for the lunch-time reception was really superb. I do strongly recommend the Bar Convent to you as a venue for a celebration. Not only does the Convent have such tremendous Catholic historical associations and is very well placed just by the old city walls of York, but it is very close to the train station - those who came from London had such a quick and easy journey.
Thanks to Peter Jones for the photographs in this post.

Posted by Fr Richard Aladics at 12:52