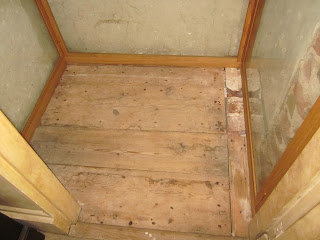 Who would have thought, when Nicholas Owen was designing and building the priest hides at Mapledurham, that he would one day be a canonised saint. This most loyal servant to the priests of his land built what are, arguably, the finest hides in the country. At Mapledurham there are thought to be six hides, some still undiscovered.
The photo above shows the second hide of the run of hides in the northwest wing of the house. This hide is directly below the hide which is entered from the fireplace. The connecting trap door between these two hides is no longer there. In the photo you are looking down onto the floor of the second hide. You can see nails fastening these boards to the joists of the house. These nails are, in fact, decoys; these boards are the entrance door into a third, lower hide. 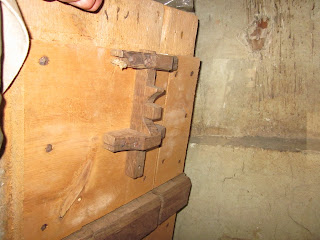 This trap door is hinged and when raised gives you access through into the basement of the house. In the above photo you can see the Owen-made latch which locked the trap door when closed. It probably had a pin, cord and wheel which was used to draw the latch aside, by those who knew how, and so enable the trap to be lifted. The whole thing could have been made twenty years ago - the latch moves to and fro quite freely, and yet it was made in the mid-1590s. This is one of the most wonderful relics that I have ever touched. 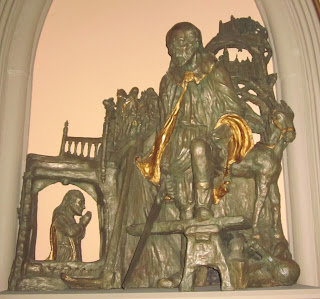 This brass, relief statue is in the church at Harvington, just outside Harvington Hall. It is the only statue of St Nicholas Owen that I know of. It shows him working on a hide; to his side a priest is already concealed in another. St Nicholas Owen died under brutal torture in the Tower of London on 2nd March 1606. What a great man he was; what a great saint he is.

Posted by Fr Richard Aladics at 15:43