The Cancer Hospice: A place of death in the Culture of Life

I'd like to thank everyone who has prayed for my sister Mandy during the past weeks as she was suffering with the secondary cancers which, yesterday, resulted in her being called on the final pilgrimage to God in heaven. She died in the Douglas Macmillan Hospice in North Staffordshire, the same place (and only two rooms away) from where my father died six years ago. It was where Mandy wanted to be, because it was where dad had been. During the night her husband and I were told that we should expect that she might die at any time. But she was strong and kept on hanging on to life until 5.20pm. That was almost exactly to the minute the same time that our father had died there back in February 2000.

Just before she went in to the hospice at the beginning of the week I'd had a chat with Mandy, just me and her. There had been some moments of anxiety during her last days in hospital before going to the hospice, but she shared in that conversation her deep faith in God and his love. And she was looking forward to seeing dad again.

I'd just like to share my reflection on the hospice itself. I know that the Douglas Macmillan Hospice - like all cancer care hospices - is trying to get away from the image of being a place you go to in order to die. These days they offer day care, respite care, and many other services which help in the palliative care of cancer sufferers. But the experience of our family has been that of the hospice as a place to help in the last days of life. You might think that a place like the in-patient unit of the hospice would be a sad and mournful place. It is after all a place of death. But this is not the case at all. It actually more resembles a rather nice hotel - or better still, an extension of home. Unlike a hospital with visiting hours and the rather clinical environment, the hospice is a place where families are welcome, everyone is treated with respect and generosity and even love. There is something particularly special about the members of staff who work there - doctors, nurses, and other staff - such that they demonstrate a deep respect for the dignity of the dying person. This is not the false dignity of the culture of death, which seeks to preserve dignity through mercy killing. This is the true culture of life, respecting the person and every dimension of their life, in the midst of their human weakness and suffering. Some people imagine that the drug regimes in hospices are there not only to make the last moments of life pain free, but also to help that last moment come. This is evidently not the case. Indeed we can be assured by palliative medicine specialists that keeping patients pain free is more likely to keep them alive longer than otherwise.

In these days I reflected on what it must have been like to die with the more excrutiating forms of cancer in the days before palliative cancer care. I can't even imagine what that 'last agony' could have been like. I am therefore very thankful to the hospice movement, begun by Douglas Macmillan back just under 100 years ago, which now results in such fine care being given to cancer sufferers in their last days. I am grateful that, in the middle of a society which is so marked by the culture of death, the culture of life is alive and well in these well-respected and valued institutions. Of course pain and suffering united to Christ is redemptive, and the Church recognises that. But the Church also tells us that:

Even if death is thought imminent, the ordinary care owed to a sick person
cannot be legitimately interrupted. The use of painkillers to alleviate the
sufferings of the dying, even at the risk of shortening their days, can be
morally in conformity with human dignity if death is not willed as either an end
or a means, but only foreseen and tolerated as inevitable Palliative care is a
special form of disinterested charity. As such it should be encouraged. (CCC 2279)

I refer back also to Fr Fleming's talk on end of life pastoral care, where he said that the number of patients asking for euthanasia reduced to zero when they were assured that they would be free of pain, and would not be abandoned by relatives.
The culture of life is seen also in the respect that is given to faith in the Hospice. There is a well kept chapel, a team of chaplains, and a distinctive Christian ethos. After my father's death, my other sister did a cross stitch of the last supper which now hangs above the altar in the chapel with a plaque in memory of our dad. This was a great focus for prayer during these last few days for me. The hospice is a real place of peace, even with so much evidence of suffering and human weakness around. I feel privileged to have shared in the passion of Christ so closely during these days of Holy Week.
It is no accident that our hospices are still not funded by Government funds (actually bringing them into the public sector would probably ruin them anyway as they'd be given goals, and be turned faith neutral). These are places which rely on charitable funds. I'd urge anyone to get involved in a local hospice, either supporting financially or with volunteer time, or simply through prayer. 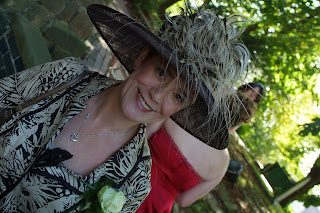 Finally, I'd like to pay tribute to my dear sister, Amanda Louise Buxton, who was always called Mandy by everyone. She was a devoted wife and mother, and a great influence for good in the lives of many young people as a scout leader for 20 years. Her 49 years may be short compared to average life expectancy but she achieved so much, and especially in the last nine years since she was first diagnosed with breast cancer. I know she had great faith and love in her heart, and that these are what the Kingdom of God are made from. I thank God that in answer to so many prayers, she was freed from her initial phase of depression over Christmas, and that she was able to live these last weeks sharing her love with family and friends. I pray she may rest in peace, and I pray for my family.
Posted by Fr Julian Green at 11:25

That's a wonderful post Fr Julian. Just remembered Wendy specially at The Solemn Liturgy. i am so pleased she didn't have to endure prolonged depression, at the end of her life. It sounds as though she had a peaceful death, & you've inspired me to think more about hospices.

so sorry to hear what happened. It is frightening how this cancer takes hold so quickly and leaves us without those we love. I am glad the hospice looked after Mandy and your famly so well.

This is the first time i've come across this site. I really can't believe that six months has passed...your blog really is a true and amazing tribute to the Douglas Macmillan Hospice and the work they do there and also to my mum - I still miss her every day but i'm so lucky to have the support of our family.