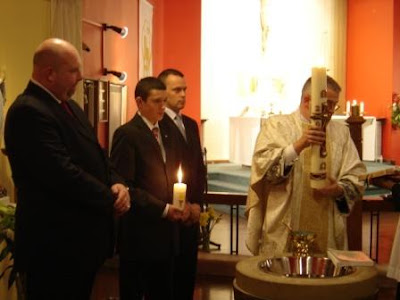 New light, new life, new members of Christ, all flowing from the work of Christ in the world. Last night we celebrated the ancient Rites which were put together (their origin is French) to be held at night, and during which the gift of Baptism would be bestowed.
During the Vigil and First Mass of Easter here in Huddersfield, Will was received into the Church, Confirmed and received the Body and Blood of the Lord for the first time. His awareness of the work of Christ in him had been heightened through his contact with the two evangelisers and catechists, John and Neil, who sponsored his entry into the Church.
The Rites of the Church which usher in the embracing of the Christian Life were not designed for their dramatic effect - yet these dramatic rites are unequalled for their beauty and suitability. Last night I was suddenly aware that our Easter fire was not catching, the wood would not burn, and visitors to the parish came to our aid stoking the fire with new kindling.
Christ told us not to forget him, but to await his return. The great Vigil is held each year because we expect his return on the night of the moon which saw him rise from the dead. Christ did not come last night to complete history, but he did come in person in the Eucharist, and he came to lead us to fulfill God's plan for us. The way by which we go is threatened by the walls of the culture of death rising on both sides to engulf us. This culture can only threaten but not engulf the way which has been created by Christ. He has filled us with light and our spirits are called to respond no longer to the darkness, but to the light.
Posted by Fr Richard Aladics at 06:34