Today's traditional name comes from Judas who, separating himself from Christ and the apostolic group, forges a secret plan with the authorities in Jerusalem to capture Jesus.

We remember Fr Julian, his sister and all her family at this time - that there may be a lot of grace for them all.

It is a great mystery to us that one of the twelve who had been with him since the beginning, who had witnessed the Life of Grace and who had been present in the Upper Room as Christ reveals, in the fullest way, the plan of God's heart for human beings, should decide that, actually, there is another, better, way - his way! And so he leaves the Upper Room early and heads off to enact his plan. 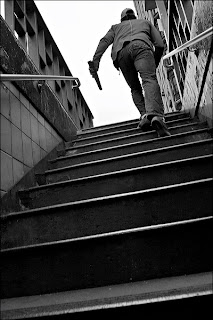 Then as now, the two world views stand in sharp contrast to one another: there is God's plan for the world and there is my plan for the world. What is most unexpected however, is that no matter how dark the world's plan is, it cannot put out the light. We see on this day, Spy Wednesday, the culture of death setting itself up against grace and trying to overthrow it.

I am reminded by today's Gospel which narrates these two plans - Judas and the authorities in the Jerusalem preparing one plan, and Jesus and the eleven just outside the city preparing another - of the Holy Father's last Christmas message. In this he spoke of the terrible contemporary phenomenon of people deciding that they don't want Christ, but rather the culture of death where people:

remain enslaved, exploited and
stripped of their dignity; others are victims of racial and religious hatred,
hampered by intolerance and discrimination, and by political interference and
physical or moral coercion with regard to the free profession of their faith
.... those who are misled by facile prophets of happiness, those who struggle
with relationships and are incapable of accepting responsibility for their
present and future, those who are trapped in a tunnel of loneliness and who
often end up enslaved to alcohol or drugs .... what are we to think of those who
choose death in the belief that they are celebrating life?

Such is the picture that Judas and secular neo-pagan culture gives to us, and in the midst of this Christ is filling his followers with light, the light of grace. If we have been "doing our homework" this Lent then we should be choosing Christ with enthsiasm and love - ready to stake our lives upon God's plan for us and for the world. The alternative to choosing the culture of death is to want Christ.

A community saved by Christ. This
is the true nature of the Church, which draws her nourishment from his Word and
his Eucharistic Body .... knowing that the One she proclaims takes away nothing that
is authenically human, but instead brings it to fulfilment. In truth, Christ
comes to destroy only evil, only sin; everything else, all the rest, he elevates
and perfects. Christ does not save us from our humanity, but through it; he
does not save us from the world, but came into the world, so that through him
the world might be saved. (B16, 25.12.06) 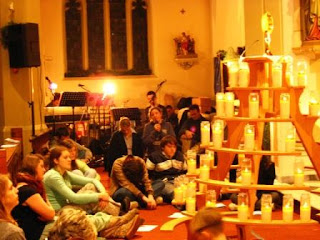 In our own lives we may be poised between choosing good or evil, between life and death, yet in the depths of our hearts we know that we need to be saved. The directions and directives of our post-modern society will not help us to choose, just as the authorities in Jerusalem were incapable of helping Judas, but Christ is totally available to us and the Life of Grace is one step away.

Posted by Fr Richard Aladics at 06:16

About 3 years ago I dropped into a black hole – four months of absolute terror. I wanted to end my life, but somehow [Holy Spirit], I reached out to a friend who took me to hospital. I had three visits [hospital] in four months – I actually thought I was in hell. I imagine I was going through some sort of metamorphosis [mental, physical & spiritual]. I had been seeing a therapist [1994] on a regular basis, up until this point in time. I actually thought I would be locked away – but the hospital staff was very supportive [I had no control over my process]. I was released from hospital 16th September 1994, but my fear, pain & shame had only subsided a little. I remember this particular morning waking up [home] & my process would start up again [fear, pain, & shame]. No one could help me, not even my therapist [I was terrified]. I asked Jesus Christ to have mercy on me & forgive me my sins. Slowly, all my fear has dissipated & I believe Jesus delivered me from my “psychological prison.” I am a practicing Catholic & the Holy Spirit is my friend & strength; every day since then has been a joy & blessing. I deserve to go to hell for the life I have led, but Jesus through His sacrifice on the cross, delivered me from my inequities. John 3: 8, John 15: 26, are verses I can relate to, organically. He’s a real person who is with me all the time. I have so much joy & peace in my life, today, after a childhood spent in orphanages [England & Australia]. God LOVES me so much. Fear, pain, & shame, are no longer my constant companions. I just wanted to share my experience with you [Luke 8: 16 – 17].

Peace Be With You
Micky