A screening in Leeds. 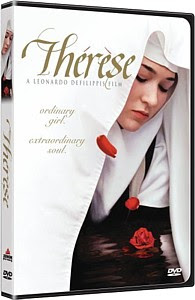 Last night twenty three of us sat down to watch the film "Therese - ordinary girl, extraordinary soul" in my parish. We were grateful to Alanna for making the DVD available to us. The film presented all the significant events in the life of St Therese of Lisieux and was a worthy attempt in portraying the making of a saint. If you have watched the film then you will be aware of how sensitively the film-makers handled her life.
I was particularly struck by the portrayal of Louis Martin, Therese's father, and the way in which events challenged his powers of discernment. In the film, as in his life, Louis Martin was faced to make decisions as a father that would affect his family, individual members of the family and himself. He approached these decisions as a real servant of grace.
Also for me, the film managed to express the enormous generosity of soul of Therese herself, in the way in which she responded to God in the real events of life. In this Lenten setting, this screening offered us a concrete vision for our own lives. Watching the film together was a grace in itself.
How extraordinary it is that The Little Way has become a great movement of grace in the Church since Therese entered Heaven.
Posted by Fr Richard Aladics at 16:17

I think it is really touching how Pope JP 11, saw fit to promote the cause of her parents to sainthood. He recognized the role they had played in helping her to formulate "the Little Way" through her upbringing. In her numerous biographies (my favourite is Fr Chris O'Donnell's,the Carmelite from Dublin).. they come across really beautifully. Does anyone one know on which date their feast is likely to fall on.. I forget. She was my immediate confirmation saint choice. She`s the best.