Which sect does he represent? 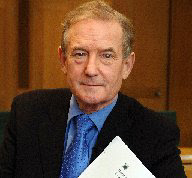 I lived in Barry Sheerman MP's Constituency of Huddersfield for three years - long enough to witness a population visibly labouring under the culture of death (endemic alcohol poisening, petty drug wars and endemic prostitution were the most obvious indicators). I wrote to him once about this, voicing my concern that whilst his own political ideas were against life, his constituency was showing clear signs of his influence. He replied saying that was sending a copy of my letter to my bishop with a complaint note attached. I heard no more.
More recently Mr Sheerman MP has been speaking out against Catholic schools: “My experience is that there is a move away from joint faith and multi-faith co-operation in the Catholic education sector, which is disappointing.”
He has commented on a report by the Bishop of Lancaster, Dr Patrick O’Donoghue, ordering Catholic schools in the North-West to teach children that contraception was wrong and that sex should only take place within marriage.
He has also criticised the Bishop of Leeds, the Rt Rev Arthur Roche, saying he had been “very difficult to engage with” on the future of All Saints Catholic College at Bradley Bar.
Why is he so concerned to catch the media's attention for his criticism of our schooling system? What sinister organisation is he speaking on behalf of, or belong to? Just because he is an MP does not mean that he does not have other, less public, links. Huddersfield, beware who you vote for!
Posted by Fr Richard Aladics at 07:30

I had meant to comment on this regarding Mr Sheermans attitude and philosophy a couple of weeks back when I saw he was also quoted as saying "....It seems to me that faith education works all right as long as people are not serious about their faith. But as soon as there is a more doctrinaire attitude, questions have to be asked......."
Well is not Mr Sheerman's attitude being expressed in a rather doctrinaire manner and one which is hardly inclusive?
Comments such as his remind me of the Tudor times when these questions were put to Thomas More, John Fisher and many others at that time and throughout the world since.
The future might well be seen by reflecting on the past.
Does the answer not seems to lay with "The New Evangalisation"?
In the face of such comments we surely need to be more serious and committed to our faith.