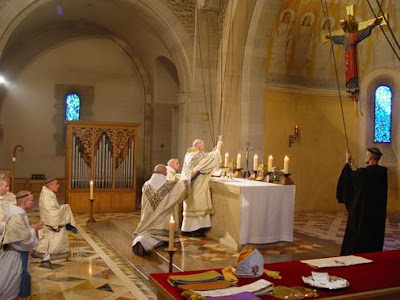 Before I went to America this June something had caught my eye on Zenit and I made a note to re-read this report. On 16th May there was a symposium held in Rome to reflect upon the Holy Father's "Motu Proprio" Summorum Pontificum. The symposium reveals that there is indeed in the Church an accurate understanding of this "Motu Proprio".
Not only is the Tridentine Mass an essential point of reference for the Liturgy today but, as the Holy Father said in his Letter accompanying the Motu Proprio, that "the two Forms of the usage of the Roman Rite can be mutually enriching".
In the light of this the secretary of the Pontifical Commission "Ecclesia Dei" said that the Motu Proprio is "the beginning of a new liturgical movement desired by the Pope", and should "be perceived by the Church as a sign of hope."
Today then, the two forms of the Roman Liturgy are called to purify, enrich and reform one another, something which is entirely in continuity with Sacrosanctum Concilium. Indeed, the Church, through Sacrosanctum Concilium, called for a reform of the Liturgy. However, the Liturgy was not reformed, but instead we were given a New Rite. And so we have the continuing presence of the Tridentine Mass; a Rite which is clearly in need of reform. Again, if we look at the New Rite, we find not only that there are many elements which are yet to be provided for, and a Rite which is somewhat unfashioned at the edges, but that "the sacrality which attracts many people to the former usage [should be demonstrated in the new Mass] more powerfully than has been the case hitherto". (B16)
The reform of the reform, which the Holy Father has spoken of is something which the Church will engender by a consistent and reflective celebration and study of both the Tridentine and the New Rite of the Mass, in other words through an organic and genuine liturgical formation.
No doubt this work will require of many that they leave behind entrenched liturgical positions and look to a time when the Church will indeed have one reformed Rite, totally Catholic, focused on Christ and the Paschal Mystery, and in which Christ's Mystical Body is genuinly revealed.
The report in Zenit is well worth reading in full.
Posted by Fr Richard Aladics at 02:18