For a new evangelical flourishing of wealth 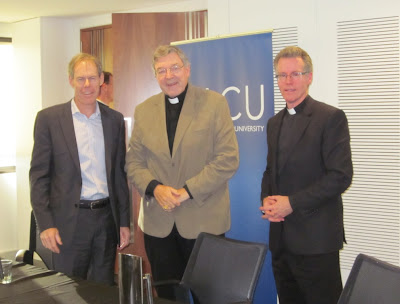 Yesterday, I was privilaged to take part in a book launch by Fr Tony Percy, the Rector of the Sydney Seminary. What a great honour too that Fr Percy should draw a Cardinal of the Church to preside over the presentation. There are not many authors that I know of who get a Cardinal to their book launch!
The book "Entrepreneurship in the Catholic Tradition" was launched at Australian Catholic University in North Sydney. In the photo above Fr Percy is on the right, Cardinal Pell in the centre and Dr Gary Johns (Professor of Public Policy at ACU) on the left.
The impression that we have of Catholic Social Teaching is that it is mainly concerned with social justice and that the rich and weathly are somewhat 'evangelically disadvantaged'. Yet as any right-thinking public policy shows, wealth must be created before it can be distributed. Fr Percy's new book shows how much Catholic Tradition has appreciated businessmen and women for centuries. What follows I took from Fr Percy's presentation at the launch.
The entrepreneur is someone who is alert to new forms of knowledge and discovers new opportunities in the market place, who has an ability to engage the factors of production (land, labour, capital and enterprise) and is prepared to take a risk that the return will reward sufficiently. So, the Christian entrepreneur is someone who has an interest in money, but an interest which is moderated by a concern for the Common Good.
Delving into the tradition we find that entrepreneurship is appreciated in the Scriptures. For instance, in Sirach 42: 1,5 we read, "Of the following things do not be ashamed ... of profit from dealing with merchants."
St Thomas Aquinas reflects on the virtue of magificence (linked to magnanimity), and in doing so anticipates modern corporate finance theory. He argues that those who put their money away to earn interest are lovers of money, while those who undertake grand and magnificent projects for the Common Good demonstrate a capacity to moderate their love for money.
Since Leo XIII the Church has consistently defended the right to private property. Socialising property, historically, has lead to mass poverty. The Church has also defended the poor, giving rise to the principle of solidarity. And in the face of a collapsing social order (the unemplyement and depression which followed WWI), the Church articulated the principle of subsidiarity - that families, businesses and associations are prior to government, and that government is called to help not hinder them.
The Church then has clarified the importance of private property and private action for modern societies. This is a truth that needs to be proclaimed from the roof-tops in the twenty-first century, gripped as we are by big governments and big corporations who have stopped helping and are now hindering free initiative. This has happened by government lowering tax and interest for large corporations and shifting the burden onto individuals and families, and by raising the rate of Capital Gains Tax.
Pius XII, bewteen 1941 and 1956 repeatedly addressed the world of business and commerce in order to inspire a new breed of young people who would be both entrepreneurial and ethical.
JPII called for a society of free work, enterprise and participation, with the understanding that private property has a social mortgage on it, and that the goods of this world have a universal destination for all people. JPII admired entrepreneurs not only because they manifest freedom in the social order, but because they manifest a unique ability to bring people together to form a communion of persons in the work environment. If people are given responsibility for their own lives, with minimal government interference, then they will become responsible for the less fortunate; that subsidiarity leads to solidarity. The Common Good then, takes precidence over self-interest. Families, businesses and associations should be respected, not undermined by government.
Entrepreneurship goes to the heart of the pillars of Catholic Social Doctrine - human life and its dignity, the Common Good, and the principles of Subsidiarity and Solidarity. It is people who are the mian resource of any economy. Natural resources are helpful, but it is the people who make transform those resources into wealth; people create wealth which alliviates poverty. Life is not the enemy of economic development, death is. Indeed, reducing the abortion rate would offer significant help to ailing economies.
I hope that Fr Percy's book will create a new awakening to the wonderful truths which are guarded by Catholic Tradition, and that many will see new opportunities for their wealth, indeed, an evangelical flourishing of human resources.
"Entrepreneurship in the Catholic Tradition" is published by ConnorCourt Press. 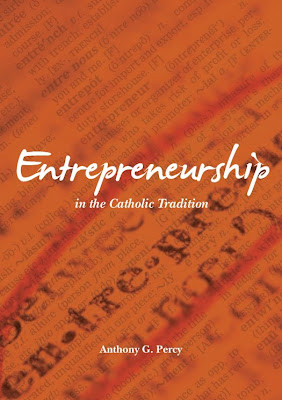 Posted by Fr Richard Aladics at 00:48