Another of the Earl's castles 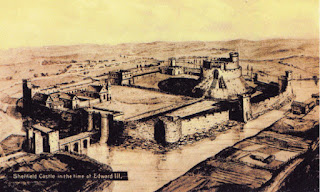 Mary was at Tutbury in February 1570 when the Holy Father, Pope St Pius V, excomunicated Elizabeth Tudor with his Bull Regnans in Excelsis. In May 1570 Mary was ill again and was moved out of draughty Tutbury and into the more comfortable Chatsworth. She was here in July of that year when the same Holy Father signed another Bull, Quo Primum, which canonised that form of the Roman Liturgy which we know as the Tridentine Liturgy. And in November 1570 she was moved to Sheffield Castle; this was to be her home for over two years. (Above is an artist's impression of what this formidable castle would have looked like in the Middle Ages.)
The Earl of Shrewsbury also had a hunting lodge about two miles south east of the castle; the ruins of this Manor are still evident in the housing estate in Sheffield which bears its name (The Manor). Mary was allowed to hunt and lodge in this house from time to time. The castle itself was utterly demolished after the Civil War and the site, once a garden, has been built on. You can find the site at Grid reference SE358877.
If England still had all of its castles and monasteries, which were so numerous, its landscape would be today like a Fairytale landscape; richly adorned with turrets, spires, fantastic stone tracery and stained glass windows. Such a landscape would have been today a wonder of the world! Sadly two men, Henry VIII and Oliver Cromwell, destroyed this unique and beautiful national heritage.
Posted by Fr Richard Aladics at 18:02