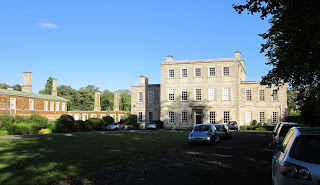 Mrs Elizabeth Vaux of Harrowden is my kind of person. It was she who, towards the end of the sixteenth century, did so much to support priests. She was someone who was very given over to God, very free (which are two ways of saying exactly the same thing.)
Fr John Gerard writes about her in his autobiography and we know that she took enormous risks for God and His church. She declared to Elizabeth Tudor's Privy Council that she would rather die than see a priest undone. I know many people who are like her today. However, there are also today many who are her opposite: readers of "The Tablet", for instance, who in my experience, tend to be stoogy and self-opinionated about the Church.
Elizabeth Vaux worn born in Kent in 1564 to the Roper family. She married George Vaux (1564-1594) of Harrowden. They had six children. When George died in 1594 she devoted her energies to supporting the Church and its priests. Harrowden Hall (photo above) was a real centre of the Faith welcoming many priests, and complete with hiding places. The Harrowden Hall that we see today is the Wellingborough Golf Club House. The three story house which Elizabeth Vaux developed was rebuilt during the period 1716 - 1719. I don't know that any hides now remain.
The other Vaux house, the Manor of Irthingborough, also welcomed priests. Nothing now remains of this house. I took the photo below in Spinney Road, Irthlingborough of the site the Vaux Manor, which would have been to the right of the road as you look up it. 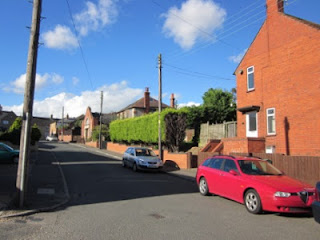 Towards the end of 1611 Harrowden Hall was raided by Government agents looking for priests; the search was unsuccessful. But Elizabeth Vaux was taken to London and put first in the Gatehouse Prison at Westminster, and then in the Fleet Prison. On 19th February 1612 she was tried and sentenced to life imprisonment and the loss of all her estates. She was paroled in July 1613 for reasons of health and returned to Harroden. In 1616 she left Harrowden and went to live in Boughton, just north of Northampton town. We know that she appeared again before the Privy Council in 1618. Her date of death and her place of burial are unknown. It is presumed, from corresponding historical evidence, that she died in 1625.
What a great example, what a great witness!
Posted by Fr Richard Aladics at 15:45