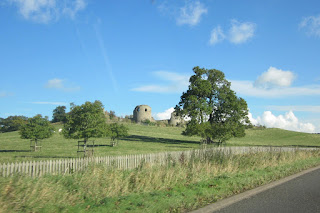 On Christmas Eve 1585 Mary, Queen of Scots was installed in Chartley Manor. She would remain here, undisturbed, until the summer of 1586.
Chartley Manor was the home of the Ferrers family who had been the local Barons since the early Middle Ages. Their castle on the hill, overlooking the village of Stowe-by-Chartley, had been abandoned in the late 1400s when the family built a moated manor house close by.
The first image above shows Chartley Manor as it would have been when Mary Stuart was lodged there. The second picture is of the remnants of the castle today seen from the road. The Manor stood to the left of this photograph on ground below the castle. The Manor was destroyed by fire in 1781 and nothing at all, except evidence of the former moat, remains. A new Manor was built on a new site nearby; this in turn was destroyed by fire and the Manor that now stands there was built in the late 1800s.
The image of Chartley Manor as was, shows that it would have been a much more cosy and hospitable house than Tutbury Castle could ever have been. Indeed, it looks like a little gem, and it is a great shame that nothing of it now remains. It was while Mary was at Chartley that members of the English Priviy Council brought their plotting against her to a head. The plot which they devised would incorporate Anthony Babington and ensure his death, and also bring to a conclusion their plan for Mary Stuart.
Posted by Fr Richard Aladics at 09:32