Trapped in a plot 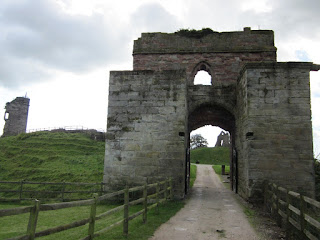 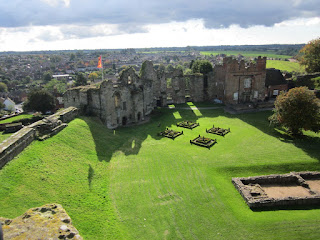 On 3rd February 1569 Mary Stuart arrived at Tutbury Castle; this was to be her prison, during four extended visits, until Christmas 1585.
She disliked the castle because it was cold and draughty. When I was there recently, although the castle occupies a prominant site overlooking the Derbyshire and Staffordshire countryside for miles in each direction, with magnificent views,  I could see that it would have been exposed to whatever the weather chose to deliver.
The castle would have been a formidable fortress in its day. However, it was remodelled by Charles I in the 1630s when huge classical windows were set into the curitain wall. As a consequence the castle suffered terrible damage in the Civil War when it was besieged by Parlimentarian armies. It suffered further demolishion when the War ended. 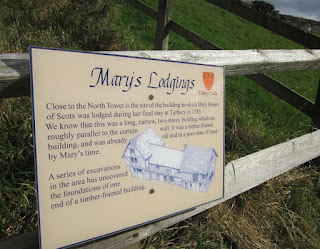 The site of the Queen's lodgings is marked; these were discovered when the inner bailey of the castle underwent a historical dig. These lodgings would have been a timber-framed house which was set against the inside of a part of the curtain wall.
Mary Stuart was Catholic and, having been the subject of English State plots from her earliest years, was now totally at the mercy of those plotters. Elizabeth Tudor and her agents were desperately setting up that particular form of the Enlightenment which is the Church of England, as a defensive cultural entity to protect the English State from Catholic truth. Curiously, having become a formalistic culture within the English State, we see today the same Church of England wrestling with its own self-focussed, self-embattled, agenda.
Many in England and beyond knew that Mary Stuart should be free and they placed their hope in the expectation that her confinement would only be temporary. I don't think that anyone then could see just how deeply this form of the Enlightenment was being entered into and forced upon the English, and the hopes of many were vain hopes.
Posted by Fr Richard Aladics at 16:59