I was in the town of Stafford recently and went to find the site of the ancient gallows. It was here that Fr Robert Sutton suffered in 1588. 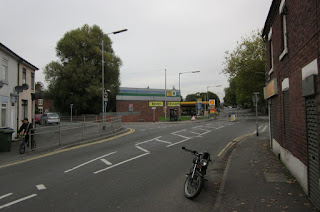 The site (photo above) is on the Sandon Road north of the town where it crosses the Sandyford Beck (Grid ref. SJ923243). The site is now built up and there is no sign (as far as I could see) commemorating the site of the gallows.
And so, while Elizabeth Tudor and her sychophants were trying to establish the conditions by which the people of England might be saved, Fr Robert Sutton allowed Christ to demonstrate His love for England and its people, through his self-giving death. Robert Sutton was hung, drwn and quartered here on 27th July 1588. He had been held in Stafford gaol (further down the Sandon Road, opposite the contemporary gaol).
Robert Sutton was born in Burton-on-Trent and became an Anglican minister at Lutterworth. However, he became convicted of the Truth and told his parishioners from the pulpit that he had been teaching them false doctrine for five and a half years, and he asked them to embrace the Catholic Faith. He left England and went to Douai where he was eventually ordained priest in March 1578. Finally, in July 1588 he was arrested in a Catholic house in Stafford and condemned for his priesthood.
It is written of him that the night before he died his gaolers witnessed him deep in prayre and surrounded by a mysterious light. And also that when his quarters were taken down from the public view almost a year after his execution, that the finger and thumb of one hand (and which had held the sacred host) were not in any way corrupted.
Fr Robert Sutton was beatified by Pope John Paul II on 22nd November 1987. During the Beatification Mass at which eighty-five English men and women martyrs were honoured, the Pope said of those who were priests that they had "wished only to feed their people with the Bread of Life and with the Word of the Gospel. To do so meant risking their lives. But for them this price was small compared to the riches they could bring to their people in the Holy Sacrifice of the Mass."
Blessed Robert Sutton, priest of God, may your light and your witness always be an inspiring grace for the people of this country; intercede for us today that the life of Christ may be focus and the whole truth of our lives.
Posted by Fr Richard Aladics at 11:52

I believe the location of the execution is the crossroads prior to the one in the photograph & as you turn into Corporation St. on the right, you will see sandyford Beck, where the gallows were.